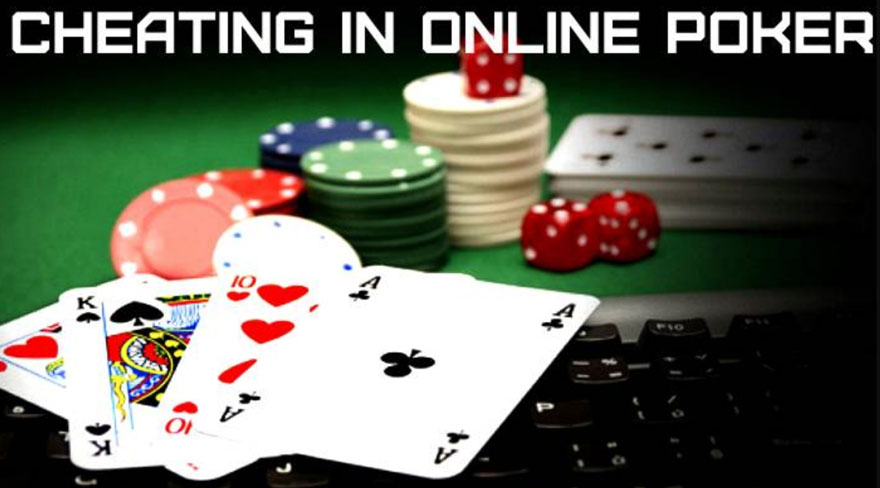 If you stumbled onto this page looking for ways to cheat at poker, either get a life or resolve yourself to mediocrity or failure. While there are exceptions, the vast majority of cheaters are losers, desperately looking for some way to win (or lose less) that involves something other than doing a good, skillful job.

Methods of cheating are mostly self-evident, which of course is how most dim-bulb cheaters blunder onto these tactics in the first place. One thing winning poker players need to do is be ever vigilant in spotting and helping to stamp out cheaters. Fortunately this is one place where the interests of honest winning players directly coincide with those of the casino. Cheaters try to steal our money, and while that is of concern to individual players, corporate/casino interests become fanatical when their money is being stolen from them.

Casino ring game poker has more cheating than casino tournament poker, both because random seating limits collusion somewhat, but also because every ring game hand offers an opportunity to directly profit via some sleazy action. Common forms of casino ring game cheating include:

splashing/shorting pots or snaring extra chips that you are not entitled torubbernecking to look at opponents’ cardsavoiding time collection or other casino feescrudely marking cards, usually aces or jokersdeliberately breaking game rules to gain an advantage

Sophisticated collusion is many degrees more effective than above, and considerably harder to detect. Fortunately, most sophisticated cheaters are so evil they seldom can “hold down the job” of cheating effectively. They don’t know how to play nicely with others, even other scum.

One note, “angling” or “shooting angles” is by definition not cheating. Angles are attempts to take advantage of the literal rules in a way they weren’t intended. Angling only becomes cheating when it becomes a rule violation, as in repeatedly shooting the same angle, like miscalling the value of a hand. Casinos generally have rules that say something like miscalling a hand will not get a hand killed, but repeated miscalling of hands could get your hand killed or you ejected from the casino.

As you can see, the listed examples are generally minor (something that might get a cheater one bet or even just a single chip), but they go on all the time. Honest players need to be ever vigilant in policing their games. Cheaters are just crooks, and the reality is that players are normally in the role of the police. The casino is more like the judge/jury/executioner.

Casino tournament cheating is considerably more difficult if only because, quite frankly, most cheaters are just too dumb to know how to cheat in their own interest. By far the most common tournament cheating tactic is to softplay a friend or partner. Softplaying an opponent when it is to your advantage can be perfectly legitimate, like when you are a chip leader and are one out of the money — you might choose to fold a strong hand before the showdown and not bust an opponent because you are making a fortune stealing blinds while the smaller stacks play timidly.

Softplaying is a difficult thing to deal with because often there is no direct financial relationship between the two people involved. Players of the same ethnic minority tend to run in the same small circles, even if they aren’t all friends (and certainly not all partners). Unfortunately, at lower buy-in tournaments, it is fairly common to see two players of the same ethnicity show “respect” to each other by not being aggressive with each other. This is cheating, and should be reported to the tournament director — which in this case normally causes the behavior to cease, since the players don’t have a common financial interest.

This obviously doesn’t have to be ethnic in nature. Every single tournament that takes place likely has at least one hand where a person doesn’t raise a friend’s blind with a marginal hand, choosing to just quietly fold instead. While this isn’t cheating, it does show that there is a fine line between deliberate softplay and marginal decisionmaking.

Collusion is a much more rare form of cheating simply because cheaters are by definition dishonest, and collusion (over any significant period of time) requires trust and an honest accounting of profits. Degenerate losers don’t make good, trusting, trustable, longterm partners.

When in a casino, reporting suspicious behavior to floor personnel is a responsibility of every honest player who wants to maximize their win. True, an exception like not reporting a blithering idiot losing rack after rack who is doing some trivial bit of cheating might be a better choice for your bottom line, but in general making games honest is a key financial goal of winning players.

Minor cheating – with friends telling each other hole cards on the phone or IM, but who do not share a bankroll or play togetherIdiot cheating – now less common than in the past when more cardrooms did not fold hands when players timed outInept collusion – where stupid partners collude together in ways so obvious that they are discovered quicklyExpert collusion – where competent people collude in an effective way, including “self-collusion” where one person plays in the same game on two different accounts.

I should also briefly address phantom cheating or loser hysteria. One of the funniest phenomenons I have observed when it comes to online poker is how some inexperienced player will post a message on RGP or another poker message board, saying something like: “When playing at a casino, the other players told me it was stupid to play online because they made a lot of money cheating with their friends while talking on the phone.”

This reminds me of a scene from Say Anything where John Cusack (memorable as “Lloyd Dobler”) is talking about women to some guy friends. After listening to their “wisdom”, he says:

“If you guys are such experts on women, then why are you hanging out here behind the Quickie Mart without girlfriends on a Friday night”?

If there was a gold mine in doing what these people claimed, why were they doing something else, and telling someone else the “secret” of their gold mine.

But at least this sort of cheating does exist to some degree. Other hysterical newsgroup postings have ranted about all manner of obscure ways that cardrooms cheat players. The allegations offer techniques that cardrooms would have to be insane to use as they would be extremely counterproductive. One of the most common of these is the “action flops” fantasy. This allegation betrays a total lack of understanding how casinos make money. Cardrooms generally hate big pots. They like small pots. Two players playing for one bet each in a 5/10 game normally max out the rake. *Any* action beyond that occurs without the cardroom making anything. Creating “action flops” would be directly against a cardroom’s interests. But delusional paranoia, where time and again bad poker players show why they are bad poker players, is a subject for other articles on this site. Bad, cheating cardrooms have existed, like they exist in any industry, but for the most part, that is not a “cheating” thing people should concern themselves with. Play at the successful cardrooms and you should have no worries.

Like b&m casinos, the online cardrooms hate cheating. Cheaters are trying to take money from them. Fortunately, while minor cheating like talking on the phone with a friend is easier online, detection of more elaborate cheating is also far easier online. Besides the hand histories that all players have available to them, online poker card rooms have a wide variety of cheating and collusion detection techniques that range from the obvious to the very subtle.

Suppose a self-colluder has two computers, two Internet connections, and two identities. If the cheater plays as Player A in a game only when he also has Player B in the same game, a red flag will be tripped. This means that even if a cheater is cheating this way successfully, he also has to play his identities on separate tables a large percentage of the time to try and avoid detection (and again, most cheaters are too greedy and too stupid to do that).

Cardrooms can see all hands folded, so if a player knows he can go all-in with a King high flush because his partner folded the ace previously, this can be easily observed by cardroom security personnel. The same with two players whipsawing an opponent (raising back and forth, where one player has the nut hand). The cardrooms can see if one of the players is doing something completely out of line.

Now here is the important thing. Each of the above two examples could go unnoticed by themselves. They probably would not trip any automatic red flags. But, if both manipulations where done by the same players, and even if only one was reported, cardroom security can look back over the logs of when these players played together, and now these separate actions, perhaps weeks apart, can be pieces in a puzzle, independent bits of evidence that can create a vivid picture of a cheating partnership.

The best tool the cardrooms have when it comes to cheating detection is the eternal vigilance of honest players. Unlike b&m casinos where hard evidence is difficult to come up with, where eyewitness suspicions and distant cameras are normally about all there is to go on, with online cardrooms honest players don’t need to provide evidence. They only need to provide suspicion. In other words, online card rooms have at their disposal algorithmic red flags as well as honest player red flags. One incident may seldom tell a whole story, but one incident can serve as a red flag that uncovers a fairly sophisticated cheating web.

Idiot and inept cheaters tend to police themselves. Their behavior is so obvious they are detected very quickly. Expert cheating is more dangerous, profitable for the cheats, and harder to detect, but online cardrooms have far more tools to detect such cheating than b&m casinos. Again, the minor cheating of friends sharing information about cards when one is not in a pot is nearly infinitely more prevalent online than in a casino, but fortunately this most common bit of cheating is also seldom crucially helpful.

In a way there is a trade off when comparing casino poker to online poker. Cheating occurs in all forms of poker. It is part of the game, like spitballs in baseball. B&M casinos have more effective cheating that goes undetected. Online cardrooms have more minor cheating that provides only a small edge.

In both cases though, the #1 weapon required to keep your money out of the hands of the cheating scum is to speak up to casino and cardroom authorities. Don’t be a nuisance by ranting about every questionable play you see, but don’t keep your major suspicions to yourself. The more cheaters kicked into the loser dustbin where they belong, the more money there is for you, and the cardrooms, and even the weaker players – which means, squashing cheaters is a poker skill.